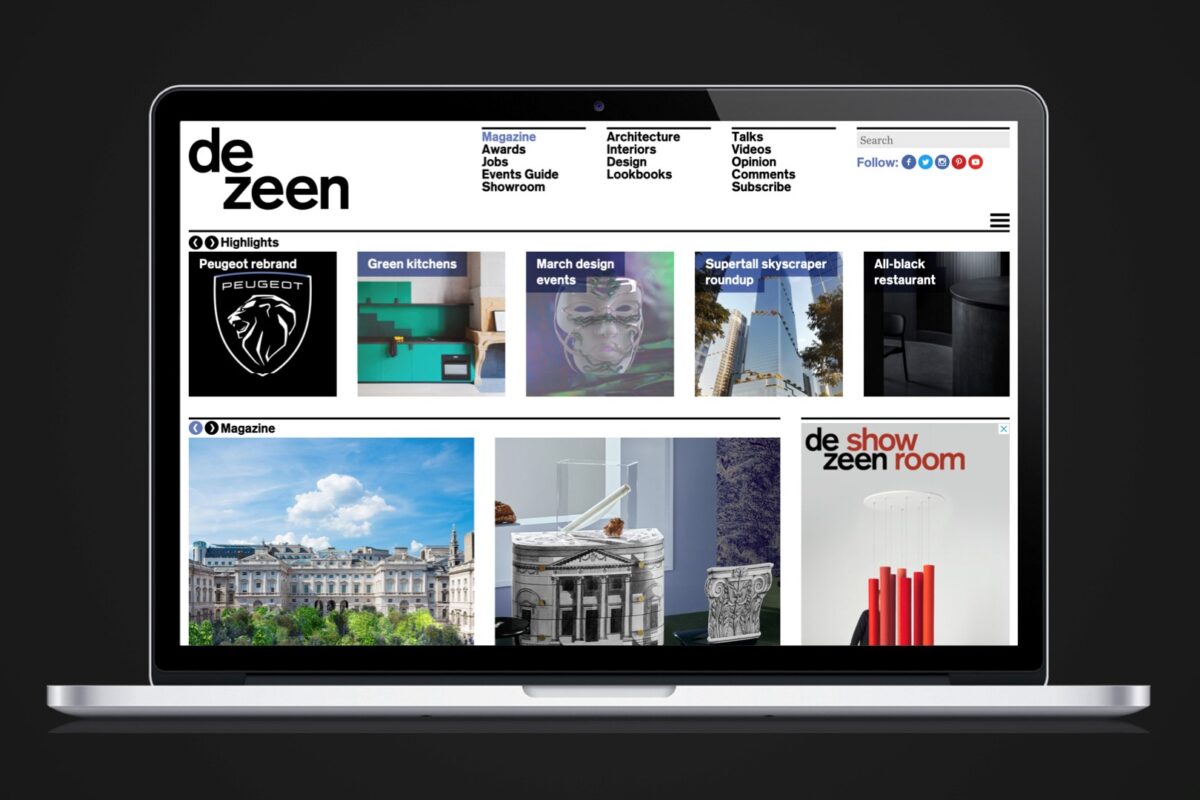 Dezeen has been acquired by Danish media company JP/Politiken Media Group in a move that will ensure the brand's editorial independence while helping it achieve its ambitious growth plans.

The deal with the UK brand is the Danish group's first acquisition outside Scandinavia and is a major step in its international expansion.

The deal, which comes a few months before Dezeen's 15th birthday, reinforces its position as the world's most popular and influential architecture and design magazine.

"I'm proud of what Dezeen has achieved over the past 15 years and I'm convinced that JP/Politiken Media Group is the best possible partner for the brand's future," said Dezeen founder and editor-in-chief Marcus Fairs.

"We want Dezeen to forever be a bastion of independent journalism, a champion of architecture and design, and a force for good in the world," Fairs wrote in a first-person article explaining the reasons for the sale of the business he launched as a bedroom startup in 2006.

"To this end, we have found a soul mate in JP Politiken Media Group. I look forward to working with the group over the coming years to develop and grow the brand".

Owned by two private trusts, JP/Politiken Media Group is committed to social responsibility and believes that journalism is vital to a democracy. A shared belief in these principles was a key driver of the deal.

"A democratic society is built on free and independent media," says the group. "It is vital for society that citizens have independent, reliable, and stable media that they can trust".

Fairs launched Dezeen as a simple blog in November 2006. Working from his spare bedroom, he started out with no investment, no business knowledge, and no technical skills, yet Dezeen has grown every year since and now employs 28 people in London.

Fairs, a journalist who previously launched and edited architecture and design print title Icon was joined by his partner Rupinder Bhogal, a former TV production manager, in 2008. Together as co-founders, they built the business into what it is today.

"Building Dezeen has been a real adventure and we are hugely grateful to our readers, our business partners, and particularly our team," said Bhogal.

"We couldn't have got this far without them. We're looking forward to the next phase of our journey together with JP/Politiken Media Group".

Dezeen is the leading media brand in the global architecture and design sector with over three million monthly unique visitors and over 6.5 million social media followers. It has won dozens of awards for its brave and innovative journalism, with Fairs, recently named specialist editor of the year and independent editor of the year at British Society of Magazine Editors awards.

In 2018, Fairs was the first digital journalist to be named an honorary fellow of the Royal Institute of British Architects. The same year, he was named one of the 1,000 most influential people in London.

Dezeen has a strong business model that has allowed it to thrive despite the coronavirus pandemic. It has a portfolio of profitable, market-leading services including its Dezeen Jobs recruitment website, the Dezeen Awards program, and the Dezeen Showroom products section. It also has a highly-skilled in-house production team, Dezeen Studio, that produces award-winning branded content including video, events, and live streaming.

As part of JP/Politiken Media Group, Dezeen will retain its editorial independence and leadership, with the senior management team remaining in place. Fairs will stay at the helm of the brand as its CEO and editor-in-chief and Bhogal will continue as HR director.

Chief content officer Benedict Hobson and chief revenue office Wai Shin Li will continue in their roles. Together they will work with JP/Politiken Media Group to grow the business and develop its content offering.

“We are thrilled and honored to join Marcus and Rupinder in the future development of Dezeen as the world’s leading media for architecture and design," said Anders Heering of JP/Politiken Media Group.

"With great passion, dedication, and unwavering confidence in quality journalism, the two founders and their very talented team have built up an impressive brand that, we believe, continues to hold plenty of unrealized potentials”.

Anders, together with special adviser Peter Normann, will form Dezeen’s new board of directors alongside Fairs and Bhogal.

JP/Politiken Media Group is one of Denmark's leading media groups. Formed by the merger of two private trusts, it exists to "equip citizens with facts and knowledge that make them better able to take an active part in a democratic society".

The group is actively shaping its business to champion sustainability, diversity, and equality, by reducing its climate footprint, increasing its female leadership across the business, addressing extensive cultural change, and ensuring that the composition of employees reflects the society at large.

For further information, or to request interviews with Marcus Fairs and Anders Heering, please contact Justyna Green at justyna@dezeen.com.

Dezeen is the world's most popular and influential architecture and design magazine. Every day, Dezeen publishes a curated selection of the best international architecture, interiors, and design projects plus breaking news, incisive features, and compelling original video content.

Launched by Marcus Fairs in 2006, it now gets over three million unique visitors each month and has a social media audience of over 6.5 million people. It is regularly ranked among the 4,000 most visited websites in the world by Alexa. Dezeen has won over 50 awards for its innovative journalism, digital publishing, and branded content.